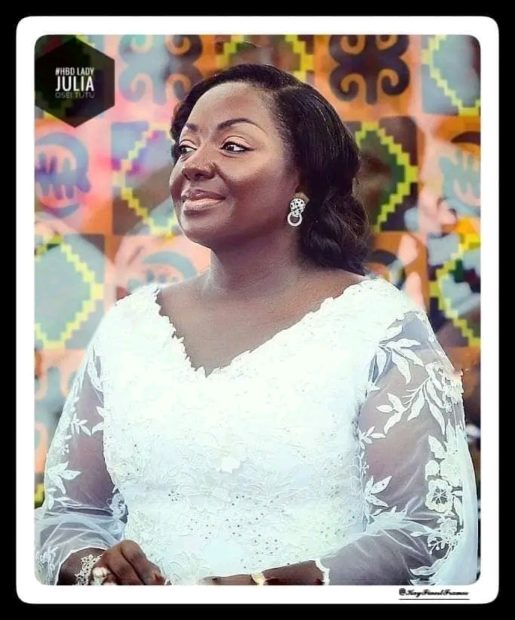 Lady Julia was born as Julia Ama Adwapa Amaning on 14th December, the last of five children born to Mr. Stephen A. Amaning, a retired career diplomat and Mrs. Ernestina A. Amaning.

Lady Julia and Otumfuo Osei Tutu II married in April 2002. She is of the House of Oyoko Dynasty (by marriage). A daughter of Akyem Abuakwa in the Eastern Region.

In 1989, Lady Julia entered the Faculty of Law at the University of Ghana, Legon and obtained a Bachelor of Law Degree with honours, LL.B. (Hons.) in 1992. She continued her law studies at the Ghana School of Law, Accra where she completed the Professional Law Course and was called to the Ghana Bar in 1994.

On completion of the Professional Law Course, she served as a Teaching Assistant in International Law at the Faculty of Law of the University of Ghana for a year and also undertook private practice at the Law Offices of Agyemang and Associates, a law firm in Accra.

In September 1995, Lady Julia Osei Tutu was admitted for post graduate studies at Queen’s University, Kingston, Ontario, Canada and obtained a Master of Laws (LL.M) in International Humanitarian Law after which she served as an Intern with Amnesty International’s United Nations Office in New York.

In 1998, she returned to Ghana and joined Ecobank Ghana Limited as Head of Legal/Corporate Affairs Officer. She was also, until March 2002, secretary to the National Partnership for Children’s Trust, which Trust is concerned with the promotion of the welfare of children in Ghana.