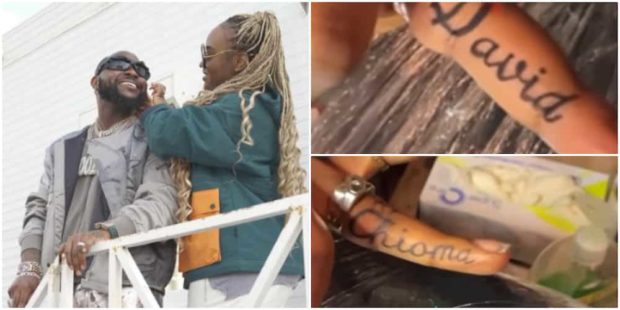 According to Mycelebritybuzz.com reports, the couples after a secret wedding have tattooed their names on the fingers of each other.

Many fans and entertainment people didn’t expect that one coming but as usual Davido and his long time partner and now wife cease not to keep surprising us.

Social Media in recent times have really sympathized with the couple after they shockingly lost their baby David Adedeji Ifeanyi Adeleke Jnr.

The incident made Davido quite emotional to the point that he decided to stay off social media for several months which got fans really concerned.

He cancelled all his shows worldwide after the incident including the opening ceremony of the Qatar FIFA World Cup Performance.

He decided to perform in the finals after he got emotionally better, already he has promised fans a more eventful year in 2023.

Many have applauded the two couple for staying close and even becoming more united after they lost their beautiful daughter. Their love started moving from grass to grace after this unfortunate incident happened. He is expected to release more bangers this year.