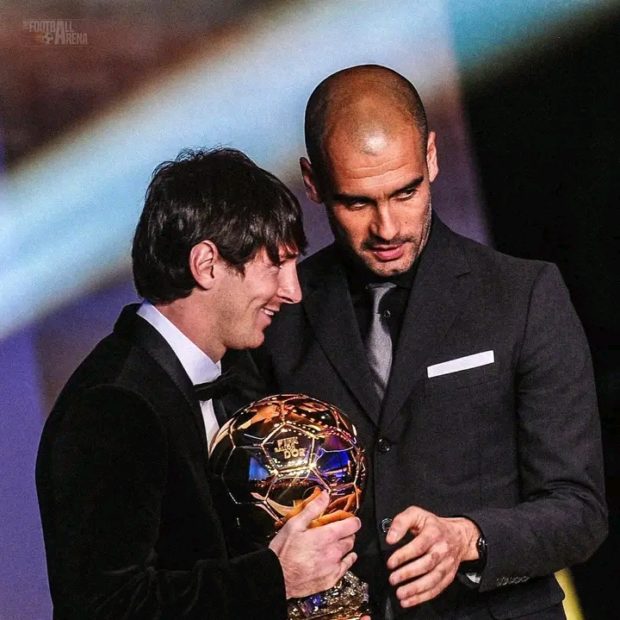 The manager for Manchester City, Pep Guardiola has once again showered praises on Argentina and PSG player, Lionel Messi after his impressive World Cup display.

Messi exhibited class after he impressed many people at the World Cup with an impressive 7 goals for the Argentines which led them to the World Cup victory.

According to Pep, nobody can doubt that Messi is undoubtedly the Greatest Player of All-time.In a video sighted by MyCelebritybuzz.com he stated,

🎙️ Pep Guardiola: “Everyone has opinion but nobody can doubt Lionel Messi is there as the greatest of all time. For me he’s the best, difficult to understand a player can compete what he’s done. The people who saw Pele or Di Stefano or Maradona.”

“The opinions are sentimental, but the other side, if he wouldn’t have won the World Cup, the opinion and my opinion wouldn’t change. It’s normal that people depends if you win or you are evaluated. The final cherries of an incredible career..”

OTHER FOOTBALL LEGENDS WHO HAVE COMPLEMENTED MESSI:

🇳🇱 Johan Cruyff : “Thank God that Messi exists.”
🇵🇹 José Mourinho : “Messi is the God of Football.”
🇪🇦 Pep Guardiola : “Messi is the best player of all time.”
🇨🇵 Arsène Wenger : “Best Footballer ever? Lionel Messi.”
🇦🇷 Diego Simeone : “Messi or Maradona? I think Messi is better.”
🇮🇹 Fabio Capello : “Messi is the only genius in world football. Period.”
🇩🇪 Jürgen Klopp : “For me, Messi will always be the number #1 in history.”
🇩🇪 Joachim Löw : “Lionel Messi is the Most Complete Player I’ve ever seen.”