Sarkodie, Nasty C and Black Sheriff Are The Only Rappers In Africa – Wizkid “Ojualegba” hit maker, Ayodeji Ibrahim Balogun also known as Wizkid has thrown a tantrum of crazy jab to rappers on the continent.

According to Mycelebritybuzz.com report, the Grammy award-winning singer has shockingly disclosed that the only rappers he consider on the African continent is Sarkodie, Nasty C, Black Sherif.

The “Essence” hit maker was captured throwing these jabs against rappers from his native Nigeria country with already some speculation coming up.

Wizkid made this statement clear on his Snapchat account were he finally expressed this sudden opinion.

He wrote, “Y’all not even rappers.Nasty C/ Sarkodie/Black Sherif the only rappers in Africa. Y’all dumb fucks”

What looks quite shocking is that wizkid of all people didn’t mention rappers from his own country.

Already social media is heating up after this comments by the super star singer.

But regardless Wizkid looks pissed by someone and many have pointed to Burna Boy after the two developed sour relationship in recent times. 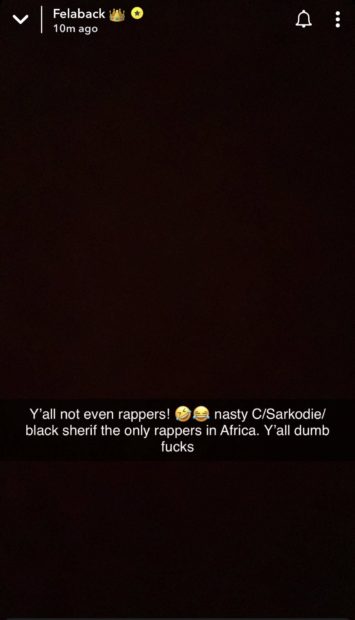