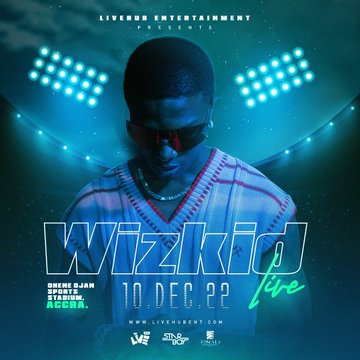 Grammy award-winning artiste, Wizkid has experienced arguably the west day of his career in no other country than Ghana.

According to Mycelebritybuzz.com “Wizkid Live Accra Concert” at Accra Sports Stadium turned out to be one of the west shows in recent times been organized in the country.

The show which had outrageous price tags including Ghc3,000 for a stadium show was quite crazy.

Wizkid couldn’t even fill 1/3 of the Accra Sports Stadium which saw the Afrobeatz superstar shamefully not turning up to perform.

Many cautioned Wizkid not to charge such ostentatious prices for such a show but he refused and this the results.

Already many entertainment critics have called on Wizkid to refund the money of the patrons among others.

“For the past few weeks, I’ve been asking if people are really buying tickets to events. I know no event organiser will tell me the truth but I just seek to tease our minds on the reality of our economic situation.

“Yesterday, on the Afro Nation and Mara Twitter Spaces convo, I brought up the issue again.

“Event organisers, will be claiming SOLD OUT, when in fact, they have not sold even 1/3 of their tickets. They would later be begging people to come fill their venues, at the eleventh hour.

Times are hard, if you have an event this Christmas season and you don’t do proper promo and reduce the prices of your tickets (if the prices are ridiculously high), your situation may be worse.”